The We-Ko-Pa Casino Resort is thrilled to announce that Ember, its fine dining restaurant, has received Wine Spectator‘s esteemed “Best of Award of Excellence.”  The honor recognizes recipients that offer extensive selections with excellent breadth across multiple regions and significant vertical depth, and Ember is now one of 19 restaurants (out of nearly 9,000) in Arizona – and one of approximately 1,000 around the world – to receive this award.

This is the second time that the Fort McDowell Yavapai Nation has been lauded by this highly regarded industry publication.  In 2006, the Ahnala Mesquite Room received the “Award of Excellence,” recognizing the restaurant’s wine list that featured a well-chosen assortment of quality producers along with a thematic match to the menu in both price and style.  The fact that the tribal nation has now been granted two Wine Spectator awards for excellence – an achievement rare among tribal casinos – affirms their commitment to delivering an exceptional culinary experience. 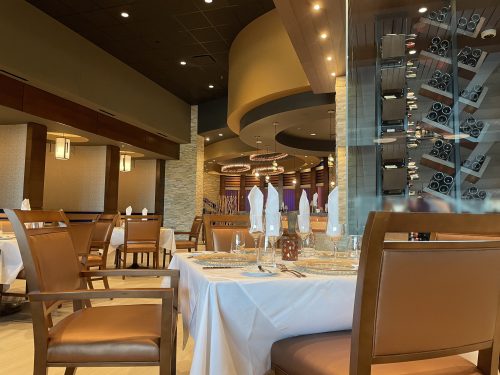 Ember’s wine program covers seventeen countries, focusing on each country’s top wine-producing regions and most highly acclaimed vineyards.  It includes 517 wines by the bottle and 26 wines by the glass – ranging from a strong California presence to Barbaresco, Rioja, New Zealand, Argentina and Germany – along with 30 Dessert Wines from across the globe as well as 15 Ports and Madeiras.

In addition, Ember has a special page in their 37-page wine list titled “The Century Club,” dedicated to the world’s top 100-point wines.  Curated for fine wine collectors, this list contains 32 critically acclaimed wines spanning more than two decades that have scored a perfect 100 points.

Wine Spectator began its program to recognize the world’s best wine lists in 1981. There are three levels: the Award of Excellence, the Best of Award of Excellence and the Grand Award—with 1,673; 1,141; and 103 winners this year in each respective category.

The energetic dining space overlooks the all-scratch kitchen with views of the culinary team, and seasonal outdoor dining by the fireplace is also available. A separate piano lounge with live entertainment five nights a week adds to the dynamic vibe.