Top Poker Players will compete in a live-action chess tournament on Grandmaster Hikaru Nakamura’s Twitch channel May 5-6. Players will be competing for a trophy and raising funds with the help of Softgiving. Strong poker players are encouraged to express their interest to teamhikaru@unitedtalent.com. GM Hikaru Nakamura is the #1 ranked in the world at 10 minute or shorter time limits. His Twitch channel has 1.2M followers. 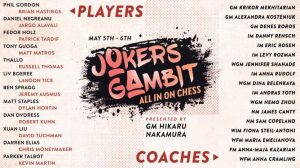 A number of top poker players are known to enjoy the game of chess. Examples are Dan Smith, who won over $36 million as a poker player after reaching a 2100 expert level at chess as a teenager, and Daniel Negreanu, a six-time World Series of Poker winner. Others include 2003 WSOP winner Chris Moneymaker, 2016 WSOP winner Fedor Holz and 2020 WSOP winner Daniel Dvoress, all of whom have registered to play in the Jokers Gambit. Xuan Liu, the only woman to be at the final table at the PokerStars Caribbean Adventure (PCA) main event, and Liv Boeree, the only female player in history to win both a WSOP bracelet and the European Poker Tour, will also participate.

The ability to analyze a position and make quick decisions is key to both poker and chess. Poker and chess inspire people to improve in sports of the mind. Across all of the competitive games on Twitch, chess has seen some of the most substantial growth of any esport in the past year.

This year, “Team Hikaru” raised over $360,000 for the humanitarian agency CARE, setting the total donation sum over three fundraiser streams at over $1 million.