Legendary Mexican icon Marco Antonio Solís will make his highly anticipated debut at The Colosseum at Caesars Palace in Las Vegas, where he will present his only two U.S. solo shows this year as part of the city’s Mexican Independence Day celebrations Friday, Sept. 10 and Saturday, Sept. 11 at 9 p.m.

Held year after year in the Entertainment Capital of the World, Mexican Independence Day brings people together from around the globe, allowing them to share unique experiences through a variety of memorable festivities, such as concerts, parties, and special events. 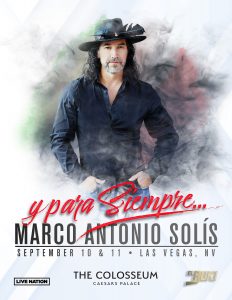 El Buki’s shows will instill a renewed sense of hope and comfort within his devoted fans, who are eager to enjoy his spectacular, emotion-filled performances and take part in the excitement of this unparalleled weekend-long celebration along with their idol once again. Never failing to deliver pure magic on stage, Solís’ upcoming tribute to his beloved Mexico promises to create a scintillating atmosphere for his audience to not only honor the country’s independence.