Jokes, punch lines, and standup comedy will have you rolling in the aisles when funnymen Kevin Nealon and Jamie Kennedy perform at Rivers Casino Philadelphia on Thursday, Aug. 5, and Friday, Aug. 27, respectively. Tickets are on sale now, range from $20 to $25, and can be purchased at RiversCasino.com/Philadelphia. 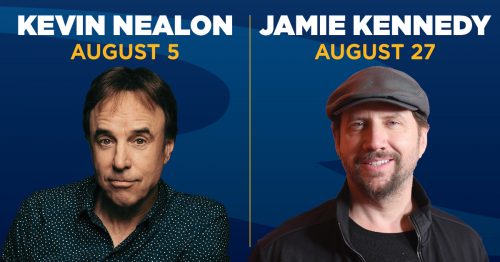 Comedic veteran Kevin Nealon, best known as a former cast member of “Saturday Night Live,” will bring his standup performance to The Event Center on Thursday, Aug. 5, at 8 p.m. Not only is Nealon an acclaimed comedian, but he also has an impressive acting resume and was featured in notable movies and television shows including “Happy Gilmore,” “The Wedding Singer,” “Daddy Day Care,” “Don’t Mess with the Zohan,” “Weeds,” and more.

Tickets for Nealon are on sale now and are $25 per person. To purchase a ticket, please visit NightOut.com/Events/Kevin-Nealon-Rivers-0805/ or RiversCasino.com/Philadelphia to purchase.

The multitalented comedian, actor, writer and producer Jamie Kennedy has been featured in the “Scream” franchise, “Romeo + Juliet,” “Ghost Whisperer,” “The Cleveland Show,” and “Malibu’s Most Wanted,” and even has starred in his own hidden-camera reality show, “The Jamie Kennedy Experiment.” Kennedy is not only a prominent standup comedian, but he is also an award-nominated actor, best known for his role in the “Scream” series.

Tickets for Kennedy are on sale now and are $20 per person. To purchase a ticket, please visit NightOut.com/Events/Jamie-Kennedy-Rivers-0827/ or RiversCasino.com/Philadelphia.

In addition to live performances and concerts, The Event Center at Rivers Casino Philadelphia can be reserved for a variety of occasions, including weddings, corporate receptions, seminars, trade shows and more. The space features floor-to-ceiling windows and panoramic views of the Delaware River waterfront and the Ben Franklin Bridge. Parking is always free.